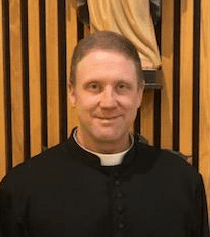 I was born and raised in Ann Arbor, which means, even though I didn’t go to the U of M for college, I am a Wolverine through and through. GO BLUE! I am the second oldest of six children of Kevin and Mary Perrotta. I have one brother, four sisters, and presently 23 nephews and nieces, and six great nephews and nieces (wow!). After graduating from Detroit Catholic Central High School, I attended Thomas Aquinas College in California, earning a degree in Liberal Arts in 1995. I returned to Saline, MI for a time, and eventually ended up working for Trader Joe’s, a grocery store company, out in Connecticut. I worked for Trader Joe’s for nine years and in four states, including stores in Farmington Hills and Northville, MI.

In 2005, I experienced the Lord calling me to enter the seminary and pursue a vocation to the priesthood. I entered Sacred Heart Major Seminary in Detroit for the Diocese of Lansing in 2006 and continued to find confirmation from God that He wanted me to be a priest.

Some of you St. Robert parishioners might recall that I spent a summer with you back in 2009 as a seminarian, and in May of 2010 I was ordained a deacon at St. Robert’s. On June 11, 2011, I was ordained to the priesthood for the Diocese of Lansing. Praise God!

I am looking forward to being your pastor, to seeing what God has in store for us, and in leading all of us to fall more deeply in love with God. 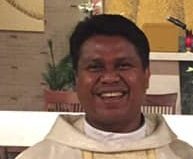 I am here in USA for almost 15 years. I was given opportunities to be in these different parishes with different pastors. There were so many things to learn in this land. I am very much privileged among many to experience life in this world, so many things I was able to learn and still learning. Fr. Roy and Fr. Louis were there for me to welcome at St. Robert’s when I arrived here in this country, I was there from almost 2 and half months before I was assigned at St Gerard, Lansing. Fr. Roy requested me also earlier come and join him in the parish but I was going through difficult times of my family so I could not come. During this time, some years were very good but 2013 onwards there were some traumas in the family. But then, I have gone through some challenging years, I am surviving here because of the people of USA.

I will be grateful to share my faith life with you all as I arrive to St.  Robert Flushing MI.  Since I and Fr. Louis belong to same diocese back in India, I was going often to that parish when he was there, so I know little bit about the parish and city. I will love to know many mores, I have taken my driving lessons with teenagers of Flint so now I will get chances to drive around there and do the ministry of God with people of God. I am looking forward to see you all in July. Thanks. May God bless you all and keep you safe and sound.

Here are our recent bulletins